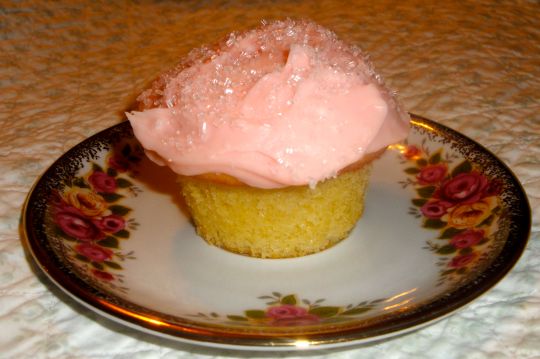 This is a recipe that my daughter Miya found, and together we modified it a bit. They’re kind of a yellow cake / muffin type cupcake. I dug out one of my frosting recipes, and we topped it all off with some Wilton sparkly sugar! Have a try… they’re simple, they’re good and they sparkle! With Valentine’s Day coming up, these would be a nice quick treat.

Cream together shortening and sugar. Mix in vanilla, eggs and milk. Add dry ingredients, mix together. It’s best to use a mixer for this step, otherwise your cupcakes will have a coarse texture. Two or 2 1/2 minutes at medium speed should do it.

Spoon batter into cupcake pan lined with cupcake paper liners. Bake for approx. 20 minutes. You can check to see if they’re done by inserting a toothpick into one of the cupcakes. If it comes out clean, they’re done!

Cool for 10 minutes in the pan, then transfer to a wire rack. If you don’t have a wire rack, a breadboard or even the counter works fine!  Once they’re completely cool, frost! 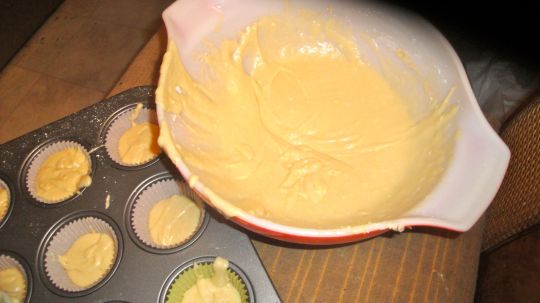 Mix butter, cream cheese, vanilla, salt and powdered sugar. Add milk, using your best judgement about frosting consistency. If the frosting is too thick after 5 tablespoons, add one more. That will usually be enough!

How To Deal With Cravings

An AWESOME chart I ran across that tells what to eat when you’re craving less-healthy foods. Several are interesting to me. At various times I crave… and I mean literally crave… things like soda pop, sweets or even have the “no I’m not hungry” problem.  This WILL be printed out and posted on my refrigerator!

I’ve been in the mood for something rich, intense and chocolate. I’ve had this Julia Child recipe for Reine de Saba (chocolate and almond cake) that I’ve been wanting to make, and I wanted to adapt it to be gluten-free. Why? Because I know some people with gluten intolerance. Because it’s Gluten-Free Diet Awareness Month, and… being a food adventurer… I just wanted to!

With me and Mimi (daughter #3) relaxed and on the threshold of a 5 day Thanksgiving vacation, I decided to tackle it. I got out Mastering the Art of French Cooking and plunged in.

Butter and flour an 8-inch round cake pan. Preheat oven to 350 degrees.

Cream the butter and sugar together for several minutes until they form a pale yellow, fluffy mixture. 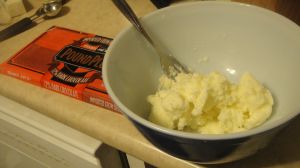 Beat in the egg yolks until well blended.

Beat the egg whites and salt in a separate bowl until soft peaks are formed;

sprinkle on the sugar and beat until stiff peaks are formed.

With a rubber spatula, blend the melted chocolate into the butter and sugar mixture, then stir in the almonds, and almond extract. Immediately stir in one fourth of the beaten egg whites to lighten the batter. Delicately fold in a third of the remaining whites and when partially blended, sift on one third of the flour and continue folding. Alternate rapidly with more egg whites and more flour until all egg whites and flour are incorporated.

Turn the batter into the cake pan, pushing the batter up to its rim with rubber spatula. Bake in middle level of preheated oven for about 25 minutes. Cake is done when it has puffed, and 2 1/2 to 3 inches around the circumference are set so that a needle plunged into that area comes out clean; the center should move slightly if the pan is shaken,and a needle comes out oily.

Allow the cake to cool in the pan for 10 minutes. Run a knife around the edge of the pan, and reverse cake on a plate or rack. Allow it to cool for an hour or two, it must be thoroughly cold if it is to be iced.

I have to admit… Mimi and I didn’t wait for the cake to cool. She didn’t want to. I didn’t want to. We were wanting instant gratification. We sliced the cake and ate it warm. This cake *sounds* moist when you cut into it. It’s one of the homliest looking cakes I’ve ever seen.  Without any icing or nice presentation, it should be called Ugly Cake. But one bite tells an entirely different story… the beauty lies within. The cake is intensely chocolate, velvety, rich, smooth… almost unctious. If you choose to do icing, I’m including Julia’s chocolate-butter icing recipe. She also recommends pressing a design of almonds over the icing. Maybe I’ll put icing on it next time.

Melt the chocolate and rum or coffee and either slowly in a double boiler,or at 10-second intervals in the microwave. Watch closely in the microwave – chocolate can burn very easily. Beat in the butter a tablespoon at a time. Then beat over a bowl with a trace of ice cubes and water to cover them until chocolate mixture has cooled to spreading  consistency. At once spread it over your cake with a spatula or knife.

So last Christmas Eve, my kids were snowed in here at my house. It turned out to be pretty fun, and I made pancakes for breakfast on Christmas morning. My daughter’s boyfriend, Mr. Smith, exclaimed from the living room, “Oh my god! These are awesome!” 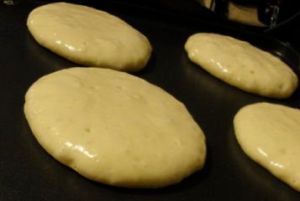 Ever since then, he asks (begs) me to make pancakes, and my daughter wants to know what my secret ingredients are. Much like my cookies, I’m willing to put the recipe out for everybody to try… but… I will say up front, I’ve disclosed ALL ingredients. So, if your pancakes aren’t “Oh my god! These are awesome!” good, it isn’t my fault!

Mix flour, salt, sugar and soda together. Beat eggs well and add milk. Blend these together, add cinnamon and vanilla and oil.